Kuden are "oral transmissions" or "oral teachings" and are very common in martial arts. Of course most teaching is done orally (as opposed to in writing) but kuden are not just the words a teacher says in a given class... Rather they are usually teachings that have been passed down for generations and the phrasing of these teachings is fairly standardized. Anyone who has been involved in Okinawan martial arts for any length of time has heard many of these kuden. Here are 5 kuden which almost every longtime student of Ryukyu martial arts has heard many times.


These sound familiar, right?  When I first heard these, they sounded like totally separate instructions (some of which made more sense than others).  However, over the years it has become clear to me that these instructions are (on one level) all describing the same thing. These all refer to aspects of the exact same motion: a pelvic tilt that minimizes the lumbar curve.

While all these oral instructions describe the same motion, many of them also have additional aspects. In this case straightening the back requires the pelvic tilt and minimizing of the lumbar cure, but it also refers to minimizing the thorasic and cervical curves. The lumbar curve has the biggest impact on power transmission, but all three curves are straightened to the degree that is naturally possible.


ROLL THE PELVIS FORWARD
Forward pelvic rotation minimizes the lumbar curve, and can offer a degree of protection to the groin. Generally this pelvic action is used in conjunction with the utilization of internal musculature and diaphragms in the lower abdomen (but this is beyond the scope of this article).

PUT STRENGTH IN THE TANDEN

The main muscles involved in rotation of the pelvis forward are in the lower abdomen, and activating the muscles in the tanden area (putting strength in the tanden) will automatically pull the the pelvis forward (assuming there isn't equal activation of antagonistic muscles like the erector spinae muscles). However, the activation of the tanden area abdominal muscles is also important for creating a firmer connection between upper and lower body (discussed below).

Practice the pelvic roll several times and pay attention to the muscles of the tanden area.... Did you feel that contraction just below the navel? That is putting strength in the tanden.

RELAX THE LOWER BACK 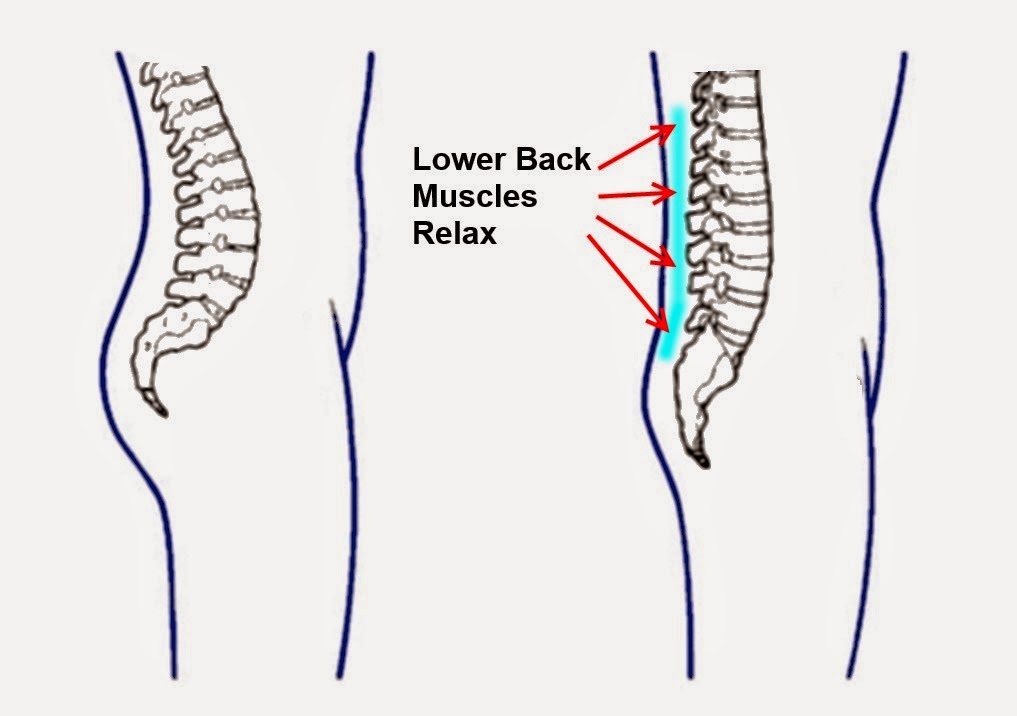 In order to tilt the pelvis forward and minimize the lumbar curve the muscles of the lower back must be relaxed (because they pull the pelvis and back the opposite direction).

Utilization of (or tension in) the muscles of the lower back (assuming there is not equal activation of antagonistic muscles) will automatically cause the pelvis to tilt backwards and the lumbar curve to become more pronounced. Too much tension in the lower back is unfortunately very common in modern karatedo, and it is not uncommon to see karateka actually leaning backwards while punching. Anyone with even a rudimentary (or just intuitive) grasp of body-mechanics will understand that leaning backwards is totally contrary to the the goal of projecting mechanical force forward (as in a punch). It guarantees one will not hit as hard as one is able to hit, and it compromises the stability of one's body structure (making it easier to lose one's balance). If there was one feature of old-style karate that I could get practitioners modern karatedo to adopt it would be to relax the lower back and eliminate this counter productive backwards lean.


Practice the pelvic tilt several times. notice how the muscles of the lower back elongate rather than contract.

Next to the tanden muscles, the muscles most most responsible for the pelvic tilt (and therefore also the minimization of the lumbar curve) are the muscles of the buttocks. In addition to this, squeezing the buttocks helps protect the groin (to some degree) and creates an internal tension that can be felt along the inner thigh.

Practice the pelvic tilt several times, notice how the buttocks are engaged in the motion.


While writing this article I stumbled onto the image below on a fitness website. It is remarkable in that the right side of the picture illustrates all five of the kuden and shows their relationship very explicitly: Straightening the spine, rolling the pelvis forward, putting strength in the lower abdomen (tanden), relaxing the lower back, squeezing the buttocks

OK, now that we have shown the relationship between these five oral instructions, we should at least briefly discuss why a pelvic tilt that minimizes the lumbar curve is important. This can be summed up in one word: gamaku.


Gamaku is an Uchinaaguchi (Okinawan language) word which refers to the waist area including the small of the back (ie the lumbar curve). Obviously gamaku coincides closely with what modern fitness gurus call "the core". Gamaku is the part of the body which joins the upper body and lower body together. It is therefore the area responsible for transmitting force from the lower body (legs and hips) to the upper body (including the arms and hands). The reverse is true as well (transferring force from upper body to lower body).  Needless to say the area is pretty important both for delivering strong blows and transferring incoming force through the body structure to the ground (rooting).

The primary load bearing structures in the human body are bones. One look at the bones of the torso immediately reveals something very important about the gamaku (waist) area. 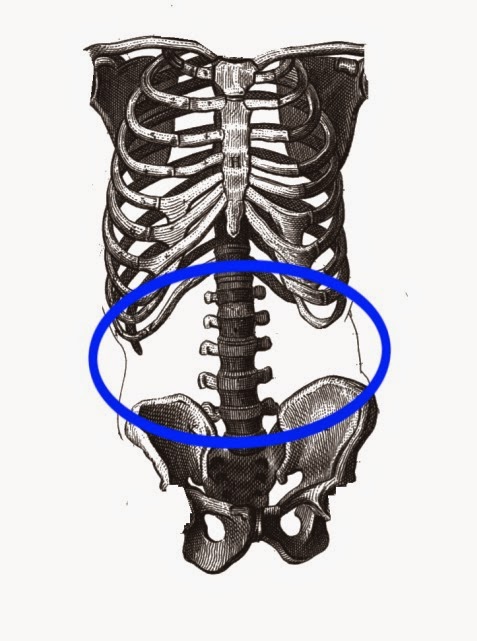 There is a lot of bone in the upper half of the torso and a lot of bone in the lower torso, but only a thin column of bone joining the upper and lower... The waist is conspicuous for it's lack of boney structure. If that wasn't bad enough, this thin column of bone is curved in a way that acts as a shock absorber, dampening the amount of force that travels from the lower body to upper body and vice versa. This is obviously not a good formula for transferring power form the hips and legs into a punch.  The solution to this problem is to minimize the lumbar curve optimizing the transmission of force through that area. As discussed in the section on "Putting strength in the tanden" the pelvic action which accomplishes this engages the rectus abdominis muscles, especially in the area around and below the navel. This provides additional structural support and stability in the area joining the upper and lower body. So there is now better structural connection on both the back and front of the body. The use of the gamaku area in Okinawan karate also stablizes the sides of the waist area. Arakaki shinshii describes this as “the moment a fist reaches a target, you employ gamaku so as to rapidly contract but not tighten the muscles between the lower ribs and the sacrum. Gamaku will put extra weight behind your tsuki and help stabilize your position, so when you hit a target, you will not be pushed back by a rebound from your own tsuki.”

So when you combine the minimization of the lumbar curve, engaging the rectus abdominis muscles, and squeezing the obliques, you've enhanced the structural connection and stability between the upper and lower body. This in turn means that you have optimized the transmission of force from lower to upper body (and the reverse).

It is interesting to note that power lifters are well aware of the lack of stability and connection in the waist area and wear specialized belts which stabilize and support the area (minimizing the chance of injury). In a very real sense, these belts can be considered artificial gamaku.


Now I realize some readers are thinking to themselves "Wait, I thought gamaku was some kind of whipping energy created through hip motion". Since these hip motions utilize the gamaku area, they can be considered an application of gamaku, but only if the basic structural gamaku I outlined above is being employed to create a firmer connection between the hips and the upper body. So the above description is "structural gamaku". Hip motions of various sorts can be dynamic applications of this structural gamaku. Another way I have heard it discussed is that structural gamaku is "basic gamaku" and the "whipping energy" can be considered "advanced gamaku" (it being based on "basic gamaku").

It is very important to understand that only a small number of Okinawan martial arts use this whipping energy to a significant extent, but all Okinawan karate uses (or should use) "structural" gamaku.

For a more detailed look at the use of gamaku in punching techniques please read my earlier article on the difference between modern and classical tsuki waza.