In Chinese martial arts there are a plethora of drills, sparring methods, and forms of sticky-hands practice that are performed from a crossed-hands position.  Most people are familiar with an iconic scene from Bruce Lee's _Enter the Dragon_ which features this sort of crossing-hands.

However, I don't think many people are aware of the extent to which training with this sort of crossed-hands position (often called a "bridge" or an "arm bridge") was imported from Chinese martial traditions into Okinawan martial arts.

It became a very important feature of "old style" Okinawan karate, but has been largely forgotten in modern karate-do.

Before we get too far, it is probably important to discuss why the crossed-hands position is advantageous. Basically it is a neutral position to start training while in contact with your partner. It is very similar to the position you may end up in whether you block your opponent's punch, or your opponent blocks your strike. I will use two stills from the "Sensei Iha partnership techniques" video (which I highly recommend watching) to illustrate this point:


Either way we end up with a similar "arm-bridge" reference point. The crossed-hands position just gives us a relatively neutral version of this position to work from.

In Okinawan karate there are a number of linguistically linked terms (kakie, kakede, kakedameshi, kakete-biki, and kakiya) that all relate to this crossed-hands position and I think it is perhaps easiest to look at the importance of this position by examining these terms.

First, it is important to understand that these terms seem to be related to a "generic" usage of the Chinese term "Gua Shou" (掛手), a term which can probably be most literally translated as "hanging hands". In a discussion with Tory Ellarson (who has shown himself to be a remarkable scholar of Chinese martial arts), after describing the use of 掛 (gua) in a variety of very specific techniques, he mentioned a broader usage:

"However in general terms 掛手 Gua Shou can also refer to sort of a neutral bridge position. Basically kind of like a generic starting position where the arms are sort of hung on each other for any type of sticky hands or bridge based sparring or sensitivity exercise."

This is precisely the sort of usage that is referred to in the group of linguistically linked terms I alluded to.

Note the kanji used for "kakie" in Miyazato shinshii's book (掛手) are the same as "Gua Shou".  Kakie is a traditional form of push-hands used in Okinawan martial arts. Although widely associated with Goju-ryu, it is also used in various branches of Shorin ryu. Onaga shinshii of Shinjinbukan shorin ryu claims that kakie is the old form of free-practice within "Ti" or old-style Okinawan martial arts, and that its use greatly predates the evolution of modern ryu-ha. He maintains that kakie should therefore be considered the common heritage of all Okinawan karate. I find this view quite persuasive, and I am inclined to agree.

That said, the best publicly available resources on kakie have come from Goju-ryu practitioners.


Here is a video of Kodo-ryu push-hands practice which I like because it illustrates how kakie can be very soft and yielding in nature.


Here is a relatively advanced set of formalized drills for kakie training based on the teachings of Taira Masaji shinshii. I strongly suggest that karateka practice these drills regardless of style. While they were developed by (and for) Goju ryu practitioners, they contain methods that every karateka can benefit from.


Below is Sydney Leijenhorst's excellent 39 page booklet on Kakie (donationware)

While this booklet is focused on the topic of kakie it is actually also a decent introduction to many topics in the Ryukyu martial arts and is the best written introduction to kakie and its place in Okinawan MA I have yet to see.

Next we should discuss a closely related practice called Kakede (掛け手) [pronounced Kakidi (カキディー) in Uchinaaguchi]. You'll notice that the kanji are the same as those used by Miyazato shinshii for kakie and "Gua Shou" in Chinese martial arts. Kakede is a traditional form of free-sparring that was practiced in Suidi and Tumaidi. Like kakie, it is done from a crossed-hands position, and a variety of close range techniques are practiced from it. Further (also like kakie), it both relies on, and develops, tactile sensitivity. Today, this practice is mainly maintained in the Motobu Kenpo lineage of Motobu Choki shinshii. It differs from kakie in that it does not use the repetitive back and forth motion of the hands. Another difference is that it often uses the Meotode posture to deflect blows with very little movement by relying on the structure of the posture itself in a manner similar to the "controlling center-line" seen in Wing-Chun (and indeed Motobu Kenpo possesses a basic form of center-line [seichusen 正中線] theory). The Meotode posture is in itself an area deserving of some study.

Here is an article by my friend Dan Djurdjevic on the Meotode posture and some of its virtues:


The karate "kamae" or guard

An addendum to the original article:


More about the "Clayton's Gap"

Jesse Enkamp has also written about this posture and how it was used (including the idea of deflecting then attacking with the same hand as shown in Dan Djurdjevic's video).

Kakede (kakidi) was performed with both partners in the Meotode posture with the hands crossed at the wrist. This forces the practitioners to work on close-range techniques and the fighting occurs within the "reactionary gap" meaning you are too close to rely on visual input alone. Instead one must develop a fairly refined sense of tactile sensitivity which is what allows one to fight effectively at that range. Because of this, more or less constant contact with the opponent is a major feature of this sort of close-range fighting, and limb-control becomes something of an important focus.

Here are a few links which show (and to some extent describe) the kakede practice within Motobu Kenpo.  From the Mumonkan Dojo's facebook page (click picture to go to the actual link) 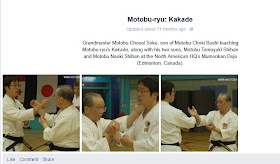 One of the photo captions describes kakede in an interesting way "A highly intelligent sensitivity based close quarters fighting system inside the reactionary gap, from our Motobu-ryu curriculum. Part of the Motobu Family legacy from the old Ryukyu Kingdom of Okinawa"

From the the official Motobu Ryu Facebook page (please click the picture and read the text in the link).

Here is another Kakede link on the Motobu Ryu Facebook page.
I strongly recommend everybody follow the Motobu Ryu Facebook page. It is a remarkable and invaluable source of historical information on Ryukyu martial arts including especially old-style karate.
Motobu Ryu Facebook Page
I want to gratefully thank Motobu Naoki shinshii (the grandson of Motobu Choki shinshii) for very patiently describing and discussing the Motobu Kenpo Kakede (kakidi) practice with me until I was able to grasp it in broad outlines. Your patience and generosity are deeply appreciated. I also want to thank Robert Rivers shinshii for confirming/clarifying a few points as well as adding some additional insights.
As an aside, I had suspected for many years that this crossed-hands position was used for free-fighting in old-style karate based on intuition and inductive reasoning. I began doing a substantial amount of my free-sparing from that position and found it an invaluable method of maintaining the general dynamic of old-style karate in a free-sparring scenario (which is quite different from the sporting feel of most free-sparring, which utilizes a much greater distance between partners). I found it enormously gratifying to learn that this intuition was correct and that these methods have been preserved in an unbroken tradition within Motobu Kenpo.


It appears that I am definitely not the only one who has had this intuition. For instance here is a very interesting video from Chris Denwood shinshii showing a variety of limb control methods derived from Naihanchi kata all being done from the Kakede position.


Next there is kakedameshi (掛け試し). According to Motobu Naoki shinshii, kakede is normally practiced without any hard contact, and because of this is a very safe and enjoyable method of practicing waza and free-fighting. However, there was a closely related form of pressure-testing or challenge-fighting called kakedameshi. Many people believe that kakedameshi was a no-rules form of brawling, but this is not the case. There were some basic rules (which seemed to vary a bit) and people would often bring "seconds" to such matches. There would also sometimes be an arbitrator or referee.  According to Motobu Chosei shinshii and Motobu Naoki shinshii, kakedameshi means a "test" or "match" (tameshi 試し) by kakede.

While there were some basic rules, kakedameshi was a very rough affair with injuries being common, and fatalities not unheard of. So in essence, it was a form of pressure testing where practitioners could try their techniques on a skilled and fully resisting partner (with heavy contact) that was done in basically the kakede fashion. I can't help but be reminded of the match in the Bruce Lee movie at the top of this post, but of course without the movie drama and theatrics. 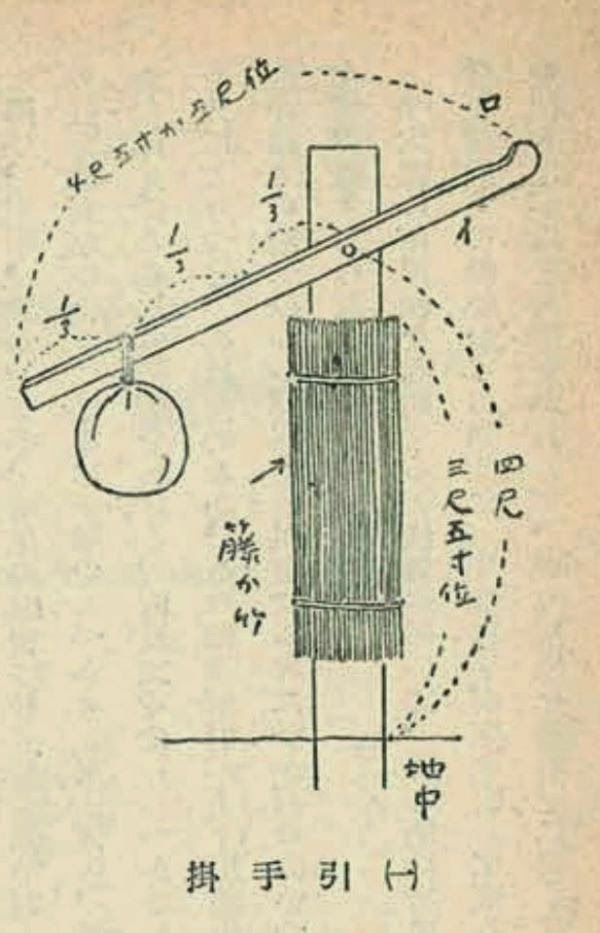 Kakie, Kakede, and Kakedameshi were important practices within old style karate, and working with this arm-bridge position, practicing limb control, and working on close-range fighting was so central to the Okinawan martial arts of the period that a special device was imported from China that allowed for the practice of these methods without a partner.

This device was once reasonably common in Ryukyu martial arts and can be seen in many old photographs from both Suidi derived arts (Shorin ryu, Motobu Kenpo etc) and Nafadi derived arts (Goju-ryu, To'on-ryu etc). Designs for building this device were also quite common in pre-war books on karate.

However, modern karate-do has completely forgotten the existence of this device. This is obviously because modern karate-do places little or no emphasis on limb-control, making such a device totally superfluous.


Here is an article on the kakiya by Chris Denwood shinshii.

Here is a video showing some more very interesting drills .


My hope is that by illustrating the importance of the crossing-hands position in older Okinawan martial arts, that I have also helped to shed some light on the centrality of close-range fighting, tactile sensitivity, and limb-control within old-style karate.

I also hope the article provides food for thought, new training ideas to explore, and some inspiration to research further.

Merry Christmas to all my brothers and sisters in the Ryukyu martial arts.
at 3:30 AM
Share